Below is a scan from a drawing of the Dong Ha Combat Base Master Plan dated 22 Jan 1969. The scan is a section of a very large scanned file showing the locations of the Airstrip and the Air Force Compound. I have added in red the locations of the Recon Area, Delta Med, and the Old French Barracks.

As a note, this recon area was first used by 1st Force and Alpha Company 3rd Recon Battalion in June July 1966. 3rd Force used the area as its home from 1966 until ?

The complete drawing can be downloaded and viewed from http://www.willpete.com/base_map.htm. 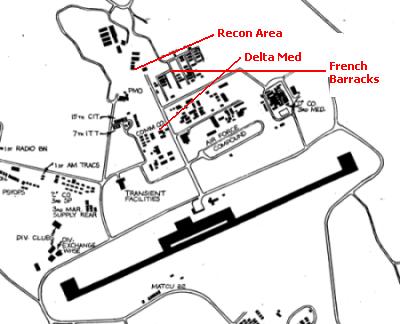 Back To Maps Page